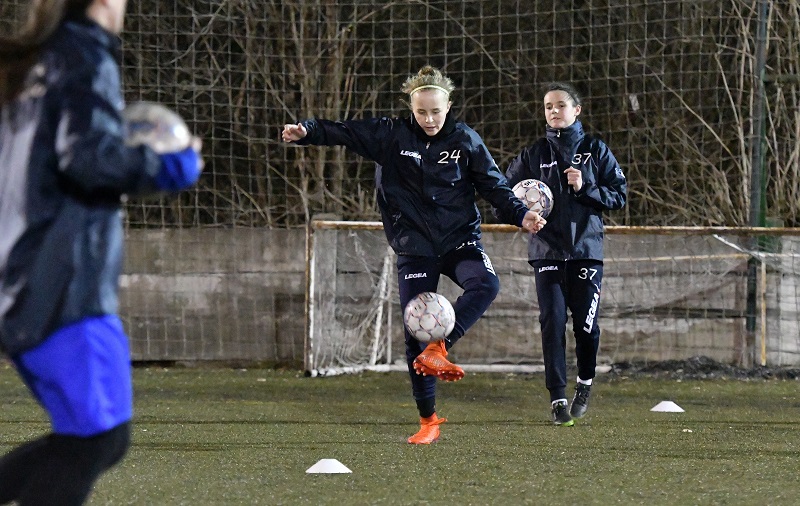 A new American player. A new Japanese player. And a new coach. FC Lokomotiva-Horni Herspice has made several improvements and the team looks to be in excellent shape to compete in the top women’s league of the Czech Republic.

“We will definitely be offensive,” said Milan Matejka, the new head coach.

The spring half of the season begins Saturday when Lokomotiva hosts FC Viktoria Plzeň. The game will be on the artificial turf at VUT in Kralove Pole (Technická 3013/14). It starts at 4:30 p.m.

All of the changes feel like a new start for the organization.

Tessa Andujar is an American who played at the top collegiate level at the University of Florida, where she was named to the All-Southeastern Conference first team as a defender in 2014. Her speed enables her to play both ends of the field. She says she is best at distributing the ball. Her role on this team will likely include more shots.

“I’d like to score some goals for this team,” said Andujar, who spent time in the Swedish professional league after college.

Kaho Oshima is a central defender from Japan, who will likely be further up the field than a classic stopper, and also contribute to the offense.

Andujar and Oshima played together for the past two seasons with FC Speranza in Osaka, which plays in Division 1 of Japan’s Nadeshiko League.

“They are the best players,” Matejka said, “and they are the most experienced players. Our team is very young. On the women’s team we have eight juniors. No other team in the republic has that. We are the youngest team in the country and we needed to add experience.”

The rest of the Lokomotiva team has been slowly maturing within the organization. Midfielder Tereza Krištofová retains her captain band. Laura Žemberyová, a left wing, and Desana Dianišková, a midfielder, both play for the Lokomotiva junior team and the U-19 Slovak national team; they will also get playing time on the Lokomotiva women’s team. Tereza Pušková has been scoring goals all winter for both the junior and the women’s teams.

Matejka has more than two decades of coaching experience at all levels of the Czech Republic, including as an assistant with the Plzeň men’s team. He also made stops in Sokolov, Vlasim, Banik Ostrava and Zlin. More recently he has served as the head coach for the women’s national youth teams.

He has a brought a new level of intensity to Lokomotiva, which proved to be a difficult adjustment for some.

“Preparation was very difficult because it was something new for the team,” Matejka said. “We had a lot of problems with it, but after two months the players now know what they should do and what the trainer and the team expects. Now it is on them to do it on the field. Now they know the style that we will play and what to do in order to be successful.”

All of the preparation is in order to kick-start an offense that scored just nine goals in 10 games during the fall.

“We want to get the ball up the field and score as many goals as possible,” Matejka said. “We will use a very offensive formation with a lot of pressing.”

Andujar is impressed by Matejka’s emphasis on tactical play, particularly during a recent training camp where the team seemed to gel.

“A lot of teams I’ve been on have been kick-and-run, and I hate that style of play,” Andujar said. “I am a faster player so I feel like a lot of teams use me just for my speed. (Matejka) really wants us to pass it and play it on the ground. We’ll play real soccer.”

And, if the winter preparation games are any guide, the team’s offensive output will increase.

Perhaps representative of the rekindled fighting spirit was the quarterfinals of the Czech Women’s Cup against 1. FC Slovacko. Lokomotiva was down 0-2 at halftime. Then, Oshima scored on a corner kick in the 70th minute, Andujar converted a penalty kick in the 82nd minute and Žemberyová scored the winner from 20 meters out in the 90th minute of play.

Also in the off season, Lokomotiva beat SV Neulengbach, 4-3, with two goals by Pušková and one apiece by Krištofová and Andujar. The team also shut out Austria Viden / Landhaus, 0-3, with goals by Viktória Kováliková, Pušková and Katka Kukučová.

“This team has a lot of heart,” Andujar said. “We’re getting better each and every week. Our goal is to be in the Top 4.”

The junior Lokomotiva team advanced into the Czech Junior Cup finals when they beat Pardubice, 4-0, last Wednesday. Žemberyová had two goals, Pušková and Vanesa Jílková both had one apiece.

The youth team will play FC Viktoria Plzeň in the Czech Cup Junior Finals on May 1. Time and location are to be determined.

Zbrojovka is now 8-5-5 in the league, moving up to sixth place with 29 points. They are five points behind third-place FC Hradec Králové (10-4-4, 34 points). The top three teams get a chance to advance into the top league at the end of the season.

After the dominating performance against Žižkov it feels like anything is possible. Six different players scored: Pavel Eismann was first with pinpoint strike into the lower right corner; Peter Štepanovský added to his two goals in the opening game; Jakub Šural, a 22-year-old defender, got his first Zbrojovka goal when he headed in a corner kick; captain Lukas Magera logged his 10th tally of the season; Antonin Růsek, a 19-year-old midfielder, got his fourth goal of the season; and, in his first start of this season and after several near misses earlier in the game, veteran Michal Škoda topped off the scoring.

Pavel Halouska, 23, got the shutout.

Žabiny Brno jumped out to a 2-0 lead in their best-of-five series with home and away victories over Loko Trutnov in the ŽBL this week.

Game 1 in Zabovresky on Saturday was a 78-44 thrashing where Žabiny Brno held Trutnov to nine points in the second and fourth quarters, and the offense was evenly distributed.

Game 2 was a 73-87 road-game victory on Tuesday with Petra Záplatová leading the offense with a game-high 23 points.

Žabiny Brno could advance to the semifinals with a victory at home in Game 3 on Thursday. The game starts at 5 p.m.

KP Brno (15-5) finished as the regular-season runner up. They will play a best-of-five series against BLK Slavia Praha. Games are scheduled for today, Saturday, Tuesday, March 21 and March 23, with the last two if necessary. KP Brno advanced to the finals last year and lost to ZVVZ USK Praha, which is again the favorite after sweeping this regular season’s 20 games.

In addition to their ŽBL postseason series, Žabiny Brno have international play to complete. They will travel this weekend to Rostov-on-Don, Russia, to face TTT Riga in a semifinal game of the European Women’s Basketball League Final Four on Saturday. Depending on the outcome, they will face either Rostov Don SFEDU or Tsmoki Minsk in either the title game or the third-place game on Sunday.

KP Brno needed extra time to get past DSK Basketball Nymburk, 69-75, in the semifinals of the Women’s Czech Cup Final Four, but they were not able to defend their title when they lost to Sokol Nilfisk Hradec Králové in the final, 68-63.

“In both matches our players, though not everything was ideal, showed character,” said Martin Pospíšil, the head coach for KP Brno. “Now it is essential for us to concentrate on the playoffs. This will be very difficult after such a weekend when we were mentally very motivated. That is our main goal right now.”

egoé Basket Brno will finish its first run through Group A1 this week when it hosts Olomoucka on Wednesday and travels to ČEZ Basketball Nymburk on Saturday.

Brno (10-17) lost both games last week, to BK Opava, 80-91, and to Dekstone Tuři Svitavy, 78-66. The team is banged up with several injured players, including Reggie Keely and Radek Farský.

Nevertheless, against Opava on Wednesday, Brno seemed to be primed to win their fourth game in a row as different players got hot hands through the first 30 minutes of play, with Deremy Geiger’s outside shooting (11 first-quarter points) and Zurab Kereselidze drives into the lane (six first-quarter points) ; Jakub Jokl making several big plays in the paint (eight second-quarter points); and Davell Roby using his defensive pressure to feed the transition game (10 third-quarter points).

Unfortunately, nobody was able to step up to lead the Brno offense in the final quarter, and Opava outscored the home team 12-30 in the final 10 minutes.

Geiger finished with 24 points and Roby had 18.

In Svitavy, Radek Pumprla, who missed most of the season due to injury himself, had his best scoring game with 15 points. Geiger had 16 points. The team was only 4 of 26 from 3-point range.

Olomoucko (16-11) is third in the league. The game starts Wednesday at 8. ČEZ Basketball Nymburk (27-0) is the perennial league powerhouse and will be a formidable opponent on Saturday.

Kometa Rests Up For Quarterfinals Against Mountfield HK

Two-time-champion HC Kometa will begin its title defense at Mountfield Hradec Kralove on Monday and Tuesday.

The best-of-seven quarterfinal series comes to Brno on Friday, March 22 and Saturday, March 23.

During the regular season, Peter Mueller led Brno with 24 goals; he also had 21 assists for 45 points. Petr Holík led the team with 55 points, which included 17 goals and 38 assists. Martin Zaťovič had 22 goals, 19 assists and 31 points.

Defender Ondřej Němec contributed significantly to the offense with four goals and 25 assists.

Marek Čiliak recently returned to the team after a short stint in the KHL. In eight games, he has given up only 13 goals in 200 shots.

Former NHL and international player Martin Erat, who will miss the first game of the quarterfinal series because of a suspension, has 17 points in 18 games (three goals and 14 assists).

Kometa finished the regular season in fifth place with 88 points. They won 23 games outright and seven in extra time, and lost 17 games and five in extra time. Hradec Králové finished in fourth place with 93 points. Liberec finished the season atop the standings with 101 points, followed by Třinec (99 points) and Plzeň (98).

Kometa has won the past two Tipsport extraliga titles by getting hot late in the regular season and then burning through the postseason.

One of those four recent losses was a home 0-3 shutout against Mounfield HK. During the season, Kometa has lost all four of its games against Mountfield HK.

Quick results for various Brno professional and recreational sports for the past week. Home team listed first (when applicable).

The Brno Sports Report is published every Wednesday. All dates and times are subject to change. Most of the stories are about the traditional “English-speaking” team sports — football, hockey, baseball, basketball, American football, cricket, rugby, etc. — but it is also about the interesting local spectator and participation sports — tennis, badminton, running, horse racing, swimming, rock climbing, biking, etc. If you have any suggestions for what should be included, please comment below or send an email to brnosports@gmail.com.

Get the news first! Sign up for free to our daily newsletter here. Top stories of the day in your mailbox every morning

A connoisseur of the unpredictable and unscripted drama of sports.
View all posts by Bruno Zalubil →
« Brno Receives Subsidy for the Construction of a Tram Line from Osová
Police Saved a Man’s Life with Defibrillators (AED), AED Available for Emergency to Public Also at 65 Locations in Brno »