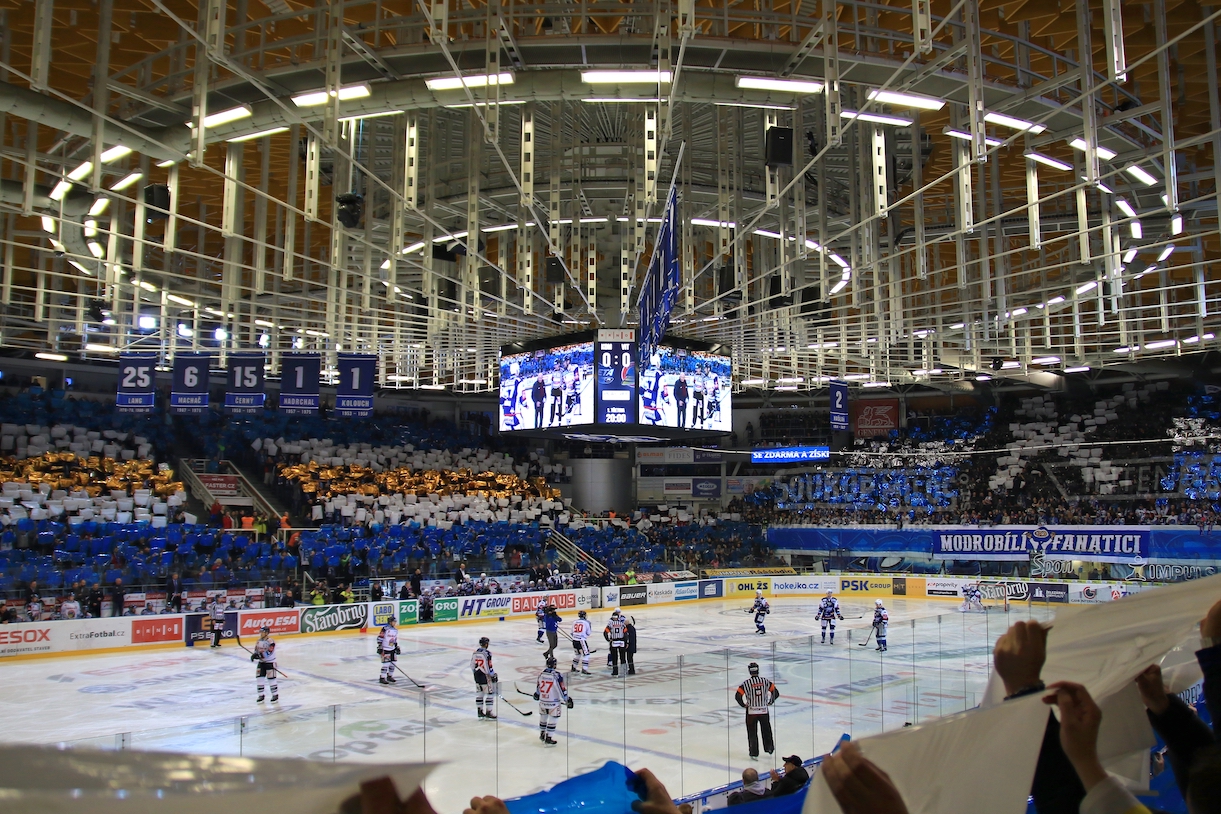 To know the city of Brno you need to experience an HC Kometa game. Špilberk Castle is great. The Cathedral of St. Peter and Paul is majestic. Villa Tugendhat is architecturally important on an international scale. The Chronometer and the Jošt statue are powerful symbols of the city’s history. And a fresh skopek of Starobrno is divine.

But, like I said, if you really want to know the city of Brno, you have to experience a Kometa game.

Even if you do not know a thing about hockey and even if you do not care about sports — in fact, especially if you don’t know a thing about hockey and don’t care about sports — then you are the exact person who needs to experience the inside of DRFG Arena when the packed stands and the standing-room-only sections explode is euphoria to celebrate, together, the scoring of a goal.

The problem is that many people already know about this intoxicating feeling, and they are already addicted. Getting tickets is not easy.

The team returns to Brno and DRFG Arena for its first home game tomorrow against defending-champion HC Oceláři Třinec at 4 p.m. If you don’t have tickets, then you can watch the game on CT Sport.

The regular season has 52 games, roughly two games a week through early March. Then the postseason starts.

Unfortunately, then came some dark days. The 1990s and early 2000s were tough. The team was relegated and struggled in the second and third leagues for almost two decades. The fans were still there — hundreds would travel to away games in tiny towns — and, eventually, the team got back into the top league.

Libor Zábranský, a former NHL and national team player who was born in Brno in 1973, took control of the club in 2005. He has served as the owner, general manager and, for the 3½ years through last season, as the head coach. In 2009, Kometa purchased the top division license from the team in Znojmo and returned to the top league. They have proven that they belong ever since. They finished second in the 2011-12 and 2013-14 seasons, building the fan base into a rabid collection of super fans.

More recently, Kometa returned to the pinnacle of the sport. They won titles in 2016-17 and 2017-18. In both years, they caught fire in the postseason, sweeping past their opponents with a postseason record of 12-2.

Think about that for a second: in consecutive postseasons, HC Kometa lost just four times in two dozen matches against the best teams in the league. It is a remarkable show of dominance in any sport.

In all, Kometa has won the national title 13 times, the most of any team in national history.

Last year, they reached the semifinals before they were eliminated. This year, Kometa are considered to be among the top four teams in the league, with a new head coach, both their offensive and defensive cores intact and NHL-experienced players as well.

The local passion for HC Kometa should not, of course, be a surprise to anyone who has lived in Brno. Fans with jerseys and scarves are commonplace on gamedays. Bars and restaurants show the games and cheers at random times flow out into the streets. Every office has the die-hard fans who recap each game around the coffee machine. Really, for what other reason would the city have outdoor public gatherings with big screens like they it does for postseason games.

Even when the team finished second in 2011-12 the city proudly displayed a detailed celebratory sand sculpture on Náměstí svobody. (I know because my hockey-mad wife of less than an hour wanted a picture in front of it, she in her wedding dress, me in my best suit, and both of us sweating in the July heat as we walked with our wedding guests from the cathedral to the restaurant where we celebrated our nuptials.)

Last Saturday, Starobrno closed down Mendlovo náměstí to throw its annual pre-season party for the team. Chinaski, a longtime popular Czech band, played in the primetime slot, but the highlight for many was the “christening” of the new uniforms that Kometa will wear during the 2019-20 season.

There are many videos on YouTube that show the passion of Kometa fans. Perhaps the best is a Starobrno commercial from a few years ago. It shows the fans as they sing the team anthem.

The chorus is: Lift your blue-and-while scarves / Lift your Brno Kometa.

Watch for yourself: An Ode to Kometa.

Facebook Comments
https://test.brnodaily.cz/2019/09/14/column/bruno-kometa-pride/https://test.brnodaily.cz/wp-content/uploads/2019/09/KometaBinB140919-1024x683.jpghttps://test.brnodaily.cz/wp-content/uploads/2019/09/KometaBinB140919-150x100.jpg2019-09-14T08:40:02+02:00Bruno ZalubilColumnBrno,Czech Republic,Famous People,Hockey,Kometa,Sport,Things To Do in BrnoDRFG Arena will roar with passion and sing with pride when HC Kometa play their first home game on Sunday. Photo credit: HC Kometa. To know the city of Brno you need to experience an HC Kometa game. Špilberk Castle is great. The Cathedral of St. Peter and Paul is majestic....Bruno ZalubilBruno Zalubilbzalubil@hotmail.comAuthorA connoisseur of the unpredictable and unscripted drama of sports.Brno Daily (test)

A connoisseur of the unpredictable and unscripted drama of sports.
View all posts by Bruno Zalubil →
« Renovation Complete At Grand Hotel Bus Station
Active Brno: The Brno Days of Health »