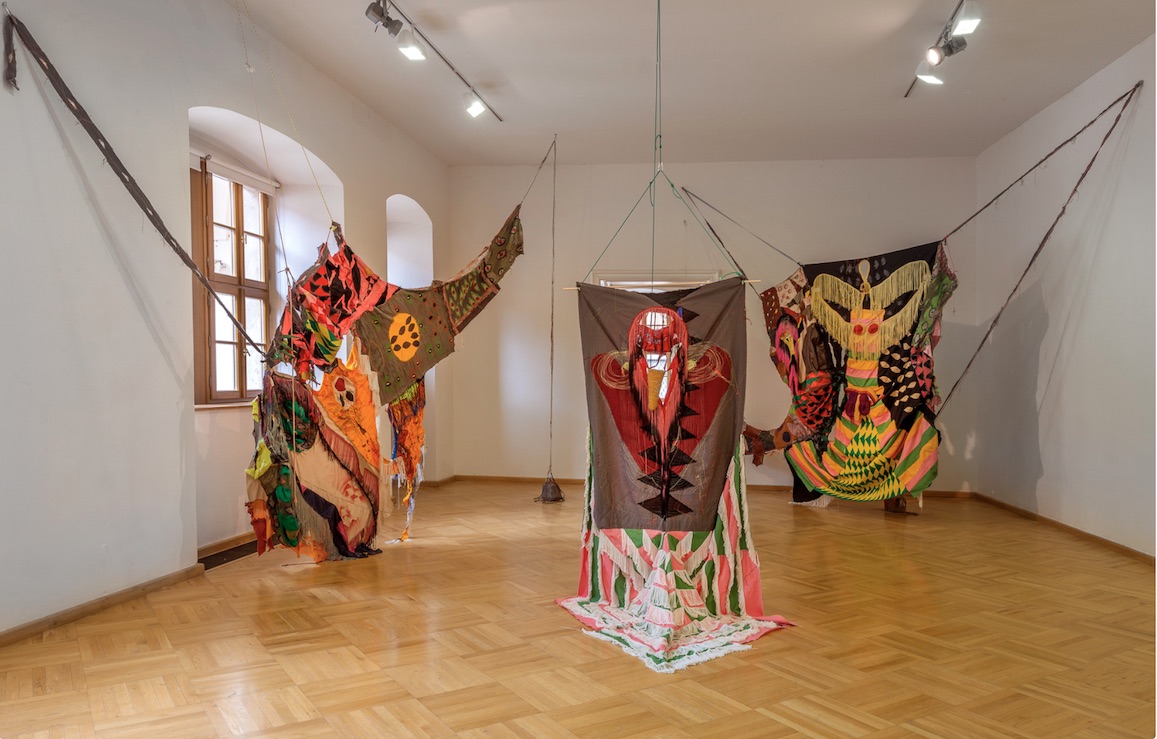 I’m going to try to convince you to go see the fantastic (and playfully frightening) new exhibition of contemporary Israeli art at Dům umění – but if your cursor is already hovering over the next link because you think this kind of thing isn’t for you – give me a second.

If you’re not a regular art show attendee – or even if you are – it’s normal to feel a bit intimidated at a typical contemporary art museum. The promotional posters on the walls outside are covered with names of artists you’ve never heard of. Next to the names there’s an image of something bizarre – say, a pink cactus – which doesn’t seem to mean much of anything. Hanging out under the posters there’s a gang of super cool art students – some of them wearing only pink denim – smoking (not vaping – they’re too cool for that) and giving you grumpy looks. You have to rush past them before they decide you’re not worthy to enter. At the front desk (which is always painted off-white), you have to work up your courage to approach the ticket lady, who manages to look both profoundly bored and aggressively vigilant. You tell her that there is one of you and that you are an adult. She does nothing, and stares at you as if waiting for a confession. You stammer that you only want to see the regular collection, not the expensive temporary exhibition featuring works of obscure genius which are essential viewing for understanding the world we live in today. You further admit that you know this is a personal and moral failing, and you promise her that you’ll come again tomorrow with more money. If you actually survive this gauntlet and make it into the gallery, then, finally, you’re alone with the art – and a few other awkwardly strolling and staring people. But…will you actually enjoy it? Or will you stroll and stare at the pink cactus and nod and just pretend you’re enjoying it?

I’ve sometimes felt awkward like this even at art museums in my home country, reading bewildering art reviews and descriptions in my native language – but my art-anxiety is often much worse in Brno, where I’m a foreigner not only to the art scene, but also to the larger culture and language. Like most of us, I do my best with Czech – but understanding a dense description of an artwork which makes complicated references to other obscure artworks is beyond me. And yet, no matter which country I’m in, when I have the time and space to relax and take in great art, and when I’m helped by well-written guides and descriptions, I really enjoy it.

If you can relate at all to what I’m saying, then you’re very lucky – we’re very lucky – to have Dům umění (the Brno House of Arts). Dům umění may fall prey to a few of the contemporary art clichés I’ve mentioned above (yes, there’s often a grumpy pink denim gang hanging about), but once you’re past those cool kids and inside with the art, there’s so much to enjoy. The museum’s exhibitions are consistently ravishing. They tend to feature work that is colorful, bold, and visually striking. The curators’ preference seems to be work that really charges a room with intensity and draws you in from the moment you enter. And even though the individual pieces can be challenging and raise a lot of questions, the exhibitions as a whole always leave you with a sense of a genuine experience – a vivid encounter with intelligent beauty. I’ve sometimes left the museum slightly startled and bemused, but I’ve never left wondering whether I saw anything interesting or not (which is how I’ve felt at less accessible museums). Maybe most importantly, Dům umění’s exhibitions are always extremely friendly for foreigners. The exhibition guides and captions are always translated into excellent (if sometimes a bit dense and overly puffed up) English.

If you haven’t given Dům umění a chance yet, their new exhibition “Drop Dead Funny: Contemporary Art from Israel” is a perfect opportunity. It’s another example of the museum’s talent for putting together exhibitions which manage to be both sophisticated and crowd-pleasing at the same time. You might be familiar with the museum’s main gallery on Malinovského náměstí – but this exhibition is at the museum’s other space, which curves around the courtyard of Dům pánů z Kunštátu, off Dominikánská street (behind Velký Špalíček).

The exhibition brings together the work of 16 artists, and a wide variety of mediums and aesthetic sensibilities; there are works of painting, sculpture, film, textile, and even puppetry. That might sound like a bit much, but there’s a balance and a coherence to the whole that makes it easily digestible. I spent about 45 minutes there and felt like I got a good sense of everything (although I could have easily spent more time). There are a few clear themes that tie all the works together. More generally, the show casts a bright, sometimes garish, light on the dark humor that can come out of suffering. More specifically, the works focus on the human body – and how it’s deformed, physically and spiritually, by the pressure of political absurdity and violence. That sounds super heavy – but instead of turning such themes into an occasion for dreary intimidation, the show works something more like a funhouse mirror maze. As you move through the gallery, turning to face each of the artists’ pieces, your first instinct is to chuckle at the twisted, colorfully mangled human and semi-human forms on display. But the pieces, instead of making you feel guilty about that instinct, validate it, elevate it to a kind of virtue, and leave you with a grim smile on your face. While bearing witness to vulnerability, the works also give off a proud toughness, a trickster’s defiance against the boring and pitiful idiocy of racist and corrupt systems. Above all, they are really a joy to look at.

Among the highlights, for me, was the first piece I encountered in the gallery – Elad Larom’s array of 9 surrealist paintings, which puts together images of intergalactic time portals, alcohol bottles, and dictator’s faces. The paintings suggest a secret message which, once deciphered, would allow you to enter the warped mind of a tyrant. I was especially struck by the image of a noose dangling over an ambiguous tiled structure (the entrance to a public toilet?). It made me think about how some of the worst political crimes and mass murders have taken place in banal public spaces (such as Chile’s national football stadium, turned into a prison and torture camp during the 1970s). And if you think you’d never say “Ew, that’s kinda gross, and yet also kinda sexy” while looking at a picture of Stonehenge…well, Larom’s image of a glossy-nailed hand fingering a crack in the ancient monument might change your mind. I also loved Gili Avissar’s big, bright fabric patchwork monstrosities, which drew me in like a magnet though the first long room of the gallery. From a distance, they seemed to dance, suspended from the ceiling. But as I got closer, I noticed that they were weighed down to the floor by ugly, crudely quarried rocks – a sobering twist.

Even the pieces which aren’t extremely compelling on their own are made better by the clever arrangement of the exhibition, which keeps you turning from one baffling beauty to the next, forcing you to constantly reevaluate what you’ve just seen. For example, after passing through Merav Kamel and Halil Balabin’s hand-sewn bestiary, which features all sorts of mangled freakiness in cuddly doll form, a simple piece like Yaron Attar’s “The Fork Killed the Pitchfork” at first seems too simple. A tiny fork stuck into a giant wooden pitchfork, it initially struck me as pretty straightforward, a hopeful metaphor for the little guy’s victory over a larger oppressive force. But this potentially positive message is deeply undercut by the animated video piece dominating the room. With blaring, echoing vocals, and images of chattering teeth, Yael Frank’s “A Problem” delivers a cynical, cyclical commentary on the audience’s forgetfulness: “You will remember only that this is a film about a problem”. It’s a dirty, thrilling joy, then, to peek behind the video screen and find, in a narrow room at the dead end of the gallery, an old slide projector scrolling through creepy caricatures of Hitler. This is Dov Or-ner’s piece “My Friend Hitler”, which portrays the Führer as a fetishistic object with Simpsons-yellow skin and exaggerated sex organs. After I left this darkened corner, reminiscent of a porn theatre, walking back though the otherwise brightly-lit exhibition again felt like a relief —and yet it also felt strangely, light-headedly shameful. In a good way? Or, at least, in the way that badness turned on its head (and its butt, and its broken limbs) by masters of art can feel very satisfying.

“Drop Dead Funny: Contemporary Art from Israel” runs until Nov. 3 at Dům pánů z Kunštátu. You don’t need to wear pink denim to enjoy it. You do need to like to look at very beautiful, slightly scary things.

Facebook Comments
https://test.brnodaily.cz/2019/10/03/culture/a-lethally-beautiful-dose-of-horror-goes-down-easy-at-the-house-of-arts/https://test.brnodaily.cz/wp-content/uploads/2019/09/Photo-M.-Dvorakova-1024x654.jpghttps://test.brnodaily.cz/wp-content/uploads/2019/09/Photo-M.-Dvorakova-150x96.jpg2019-10-03T16:46:11+02:00Joe LennonArt & CultureBrno,Czech Republic,English-friendly,Family and Kids,Fine ArtsPhoto: Exhibition 'Drop Dead Funny: Contemporary art from Israel' at the Brno House of Arts. Credit: M. Dvorakova / The Brno House of Arts. I’m going to try to convince you to go see the fantastic (and playfully frightening) new exhibition of contemporary Israeli art at Dům umění – but if your...Joe Lennon zhoulennon@gmail.comAuthorJoe Lennon came to Brno in 2006, left in 2009, then came back in 2016. He has no plans to leave again, so Brno is stuck with him for now. He teaches English and Writing at Masaryk University Language Centre. In his free time, he wanders around the city aimlessly, taking photos of nothing and posting them on Instagram and Facebook. He is originally from Atlanta, Georgia, home of Coca-Cola and Martin Luther King, Jr. He is a pretty big fan of both.Brno Daily (test)

Joe Lennon came to Brno in 2006, left in 2009, then came back in 2016. He has no plans to leave again, so Brno is stuck with him for now. He teaches English and Writing at Masaryk University Language Centre. In his free time, he wanders around the city aimlessly, taking photos of nothing and posting them on Instagram and Facebook. He is originally from Atlanta, Georgia, home of Coca-Cola and Martin Luther King, Jr. He is a pretty big fan of both.
View all posts by Joe Lennon →
« Serial Killer Fest Delivered Six Packed Days of Events and Film Screenings in Brno
South Moravia’s Elite Police Intervention Unit Is the Best In The Czech Republic »