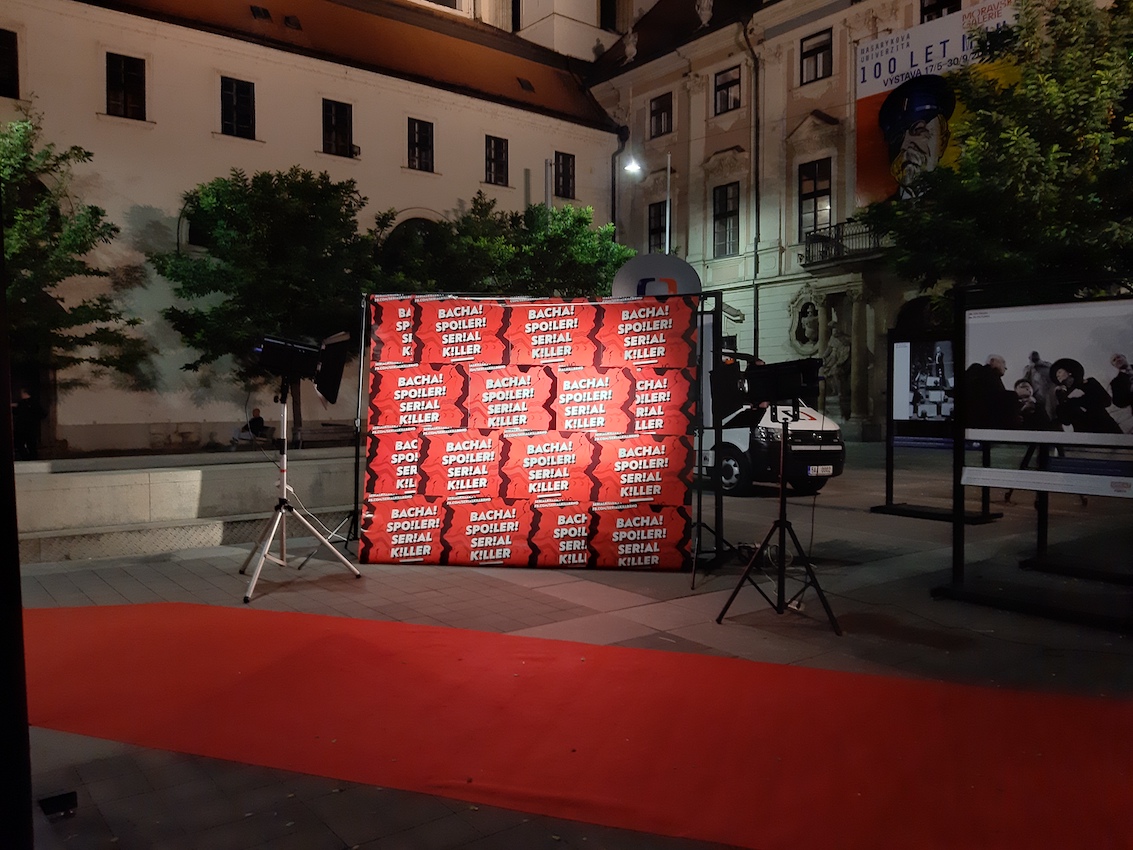 Brno played host for the second time to a festival which, although new, has a lot of potential to become an important reference point for the industry it tries to showcase. The program featured, among other things, upcoming series for 2020, and was attended by television professionals from all over Europe over five days of screenings. Photo credit: KK / Brno Daily.

Brno, Oct 3 (BD) – When Serial Killer Festival arrived in the city, their original and sophisticated red decorations became visible across Brno. For five days the festival offered daily screenings, talks by personalities and leaders of the industry, and parties at various locations, providing a week full of opportunities for lovers of series. It was a big effort from a small team which showcased the TV and web series industry in Central and Eastern Europe.

The week opened with a red carpet event that welcomed many stars of Czech and international television and film production, followed by an opening ceremony in Kino Scala moderated by Daniela Písařovicová.

The highlight of the evening was the exclusive premiere of Czech Traitors directed by Viktor Taus, accompanied by screenwriter Miro Šifra, lead actor Cyril Dobrý, and Jan Maxa from Czech Television.

– The first sentence of a Forbes magazine article about the festival.

After that it was time to enjoy the marathon screenings and panel discussions with actors and creative teams, as well as the parties. Some of the featured screenings in the program included trending series like “Adults” (Anna Dahlman, 2019), “Generation B” (Pieter Van Hees, 2017), “Skins” (Adam Smith, Paul Gray, 2007), and “Success” (Danis Tanovic, 2019), a provocative and daring production from HBO Europe.

The locations for the screenings and official events included: Kino Scala; the NoArt Kino, which held marathons where avid “serial killers” watched shows like “Skins”; Cafe Trojka, which hosted a fantastic Roman-themed party exclusively for Cinema Pass holders (including six which were given away by Brno Daily!); and of course Forkys Restaurant, which hosted – in great style – the award ceremony and closing party, just at the moment when the undead were taking over the city center for #ZombieWalkBrno2019, also part of the festival events (See our photo gallery and video here).

The festival included more than 40 screenings and a large accompanying program for about 10,000 visitors.

At the closing event on Saturday 28th I had the opportunity to speak to the Festival Director, Kamila Zlatušková. I asked about her overall feelings and thoughts on how the festival unfolded and whether she was satisfied with it. Here’s what she had to say:

“I‘m happy, I’m really happy because the stress was enormous. We’re just a small team and we don’t have as much money as other festivals of the same size. (…) It’s a huge investment of energy, and I got to feel “it’s worth it” (…) I’m very happy it went through and we are on a good direction to bigger things.”

She added, “When you want to do something really good you have to look at how other people do it, and not copy them but find your own way, pick the best things from others. We want to promote the best European drama in this format (TV and web series). Sometimes the system is blocking the talent, and we want people to see that great things are being done in this part of Europe.”

“Serial Killers is also the name for ‘Killing Stereotypes’.”

The festival could not be complete without the award ceremony of course, with the international jury that selected the winners and the winners themselves all in attendance, to receive their prizes and give their acceptance speeches.

The main contest was won by the Russian drama Black Out, which tells the story of a Soviet veteran of the war in Afghanistan; “#martyisdead” was selected as the best web series, a dark story about cyberbullying based on real events, a Czech project by Mall.tv and Safe on the Net.

Facebook Comments
https://test.brnodaily.cz/2019/10/03/pop-culture/serial-killer-fest-delivered-five-packed-days-of-events-and-film-screenings-in-brno/https://test.brnodaily.cz/wp-content/uploads/2019/10/Serial-Killer-1-1024x768.jpghttps://test.brnodaily.cz/wp-content/uploads/2019/10/Serial-Killer-1-150x113.jpg2019-10-03T14:44:53+02:00Carlos MorenoPop CultureBrno,Brno Expats,Czech Republic,English-friendly,Events in Brno,Film,Film Festival,NewsBrno played host for the second time to a festival which, although new, has a lot of potential to become an important reference point for the industry it tries to showcase. The program featured, among other things, upcoming series for 2020, and was attended by television professionals from all...Carlos MorenoCarlos Morenomorenomendoza2016@gmail.comAuthorCarlos Moreno is a writer with a passion for Comedy and Social Media, he runs the projects Desperate Comedians and Meeting with a Meaning in Brno.Brno Daily (test)

Carlos Moreno is a writer with a passion for Comedy and Social Media, he runs the projects Desperate Comedians and Meeting with a Meaning in Brno.
View all posts by Carlos Moreno →
« Participatory Budgeting For Schools To Be Rolled Out Across Brno
A Lethally Beautiful Dose of Horror Goes Down Easy at the House of Arts »