Totalitarianism Returns To Brno After 30 Years 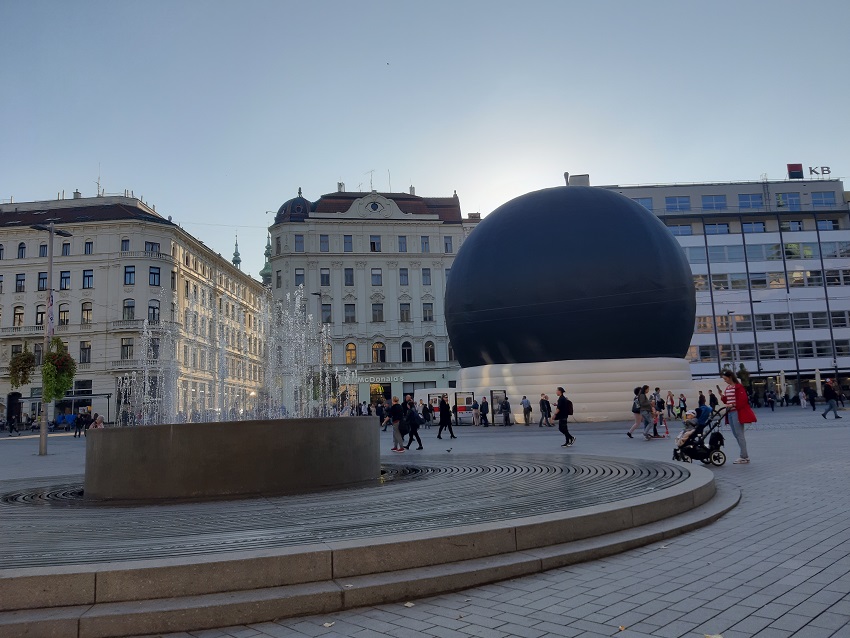 Multimedia project “Totalita” will transport visitors back in time to show the reality of life in Czechoslovakia during the communist years 1948-89. The project is one of many events planned to commemorate the 30th anniversary of the Velvet Revolution. Photos: KK / Brno Daily.

Brno, Oct 14 (BD) – Life in totalitarian Czechoslovakia in the years 1948–1989 is illustrated by the new multimedia project Totalita [“Totalitarianism”], which runs from today to Saturday in namesti Svobody. “The aim is to show what the communist regime really looked like in Czechoslovakia, especially to the youngest generation,” said Lukáš Nádvorník from Media Park, which is funding the project.

Inside a special projection dome in the shape of a giant black balloon, modern technology will take visitors back to experience the atmosphere of pre-1989 communist Czechoslovakia for twenty minutes, drawing them into the action by a 3D projection on the dome of the balloon combined with video mapping. The multimedia experience is complemented by information panels in front of the dome, with attractive photographs and simple descriptive texts detailing different aspects of totalitarianism in Czechoslovakia and how they manifested themselves in everyday life. The panels also include QR codes, allowing visitors to watch interesting videos such as the political trial of Milada Horáková, a period report from a military parade on Prague’s Letná Plain, and the student demonstrations of November 17th, 1989.

The project “TOTALITA: a multimedia guide to Czechoslovakia 1948–1989” was created for the occasion of the 30th anniversary of the November Revolution, in cooperation with leading Czech historian Petr Blažek and under the auspices of the President of the Czech Senate Jaroslav Kubera and the Platform of European Memory and Conscience. It was launched in České Budějovice and will continue to Plzeň and Prague in the coming weeks.

Blažek, from the Institute for the Study of Totalitarian Regimes, explained the intention and scope of the exhibition: “Our aim is to present the basic totalitarian features of the Communist regime, which often reached an absurd or even comical level due to its profound systemic crisis in the late 1980s. In addition to ideological and repressive mechanisms, we will also try to explain the widespread banality, uniformity and closeness of the way of life of that time.”

The project is one of many events organized by students, the non-profit sector and other organizers and supported by the City of Brno in commemoration of the 30th anniversary of the Velvet Revolution. Overall, dozens of events are planned during the autumn. The installation will be open to the public free of charge every day from 8:30am to 7pm, but on weekdays between 8:30am and 2:30pm it will be reserved for elementary and secondary schools, who can book entry via the online reservation system.

The themes of collective memory and preservation of history for younger generations are clearly key in any historic anniversary, and this installation is a particularly important part of that process, as Brno Mayor Marketa Vankova explains: “It is no secret that probably a large part of the young generation has no historical knowledge of the past regime and the key events of 1989. We welcome this project as it can help children and students perceive and perhaps partially understand the atmosphere of 30 years ago.” However, she adds, the installation has value for everyone: “Of course, other generations are also invited to the projection dome. They can reminisce about how they lived before November 1989, or how they actively participated in events that triggered changes in our country. It is, in my opinion, an opportunity for parents with children or grandparents with grandchildren to visit together – nothing surpasses the stories of people who have experienced a particular era for themselves.”

Facebook Comments
https://test.brnodaily.cz/2019/10/14/events-in-brno/totalitarianism-returns-to-brno-after-30-years/https://test.brnodaily.cz/wp-content/uploads/2019/10/Totalita-exhibition-Brno-8.jpghttps://test.brnodaily.cz/wp-content/uploads/2019/10/Totalita-exhibition-Brno-8-150x113.jpg2019-10-14T18:06:01+02:00Jack StephensArt & CultureEvents in BrnoBrno,Communism,Culture,Czech Republic,HistoryMultimedia project “Totalita” will transport visitors back in time to show the reality of life in Czechoslovakia during the communist years 1948-89. The project is one of many events planned to commemorate the 30th anniversary of the Velvet Revolution. Photos: KK / Brno Daily. Brno, Oct 14 (BD) -...Jack Stephens jack.stephens50@gmail.comAuthorA writer and English teacher originally from London who has lived in Brno since 2011, interested in politics, low culture, and all things strange and/or Czech.Brno Daily (test)

A writer and English teacher originally from London who has lived in Brno since 2011, interested in politics, low culture, and all things strange and/or Czech.
View all posts by Jack Stephens →
« 11 Injured And One Dead In Multi-Car Pile-Up On Prague-Brno Highway
The 60th Brno 16 Short Film Festival Ended Last Saturday »